Or Pepper Steak. Simple enough concept, but check the internet and the gastronomes get pretty heated. It doesn’t have cream. Yes it does! It only has red wine. Brandy, you fool! Pepper should only be applied to one side of the steak. Oh you moron, its both sides.

I could go on. Basically I had two small fillet steaks, some brandy, cream and not enough peppercorns. In fact you’re supposed to have green and black peppercorns. Which I had. I bought the green ones by mistake thinking they were capers, for something else. But they’re pickled so I forgot about them. 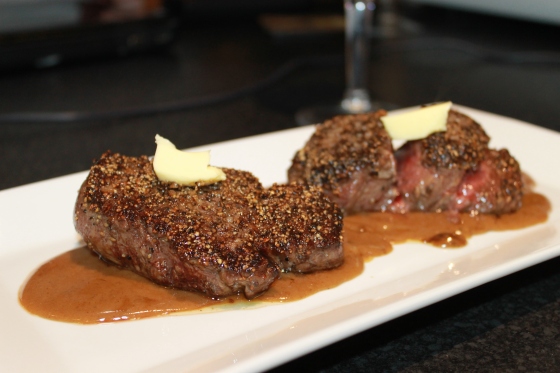 Anyway I decided steak au poivre contains these ingredients. Actually, thinking about it, if I was the last meateater left on the planet, only populated by vegetarians (wife included, obvs) then I would be the sole source of knowledge on steak au poivre. Then, as I gradually converted said planet of veggies to the delights of juicy yummy meatiness, I would make a fortune. ‘How to Make the Perfect Steak’ would be a best seller. ‘Big Macs the way MacDonald’s Used to Make’ would sell by the million. Mind you I’d have to find someone to kill the animals, I ain’t doing that. A blind drunk vegetarian?Maybe they could do it. I’m treading on dangerous territory here. The wife is out, but she’ll be back.

I forgot about the steak. Here are the ingredients, in picture form:

First make sure your steaks are at room temperature.

Make the clarified butter by melting it in a pan. (Clarified butter doesn’t go so brown so quickly because you have removed the impurities which burn).

Scoop off the white bits on the top and then decant the good butter into a bowl, leaving the remaining bad butter in the pan.. 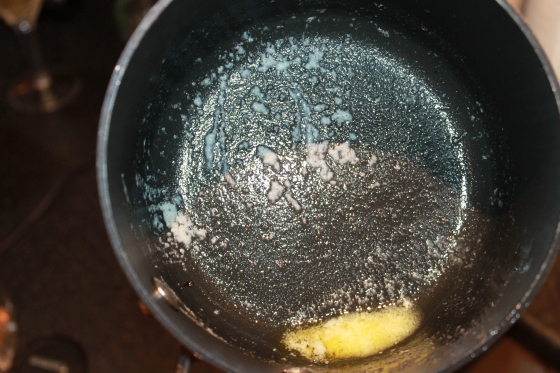 Now get the peppercorns ready. Whizz them in a whizzer for a second or two (you don’t want them too fine). Then put them in a sieve. You don’t need the powdery stuff, just the shelly bits. Might seem counter-intuitive but you don’t want to overpower the steaks with the taste of pepper.

Put the pepper on a dish of some kind and press the steaks into the pepper. If you have enough, do both sides. If not, just one (like me).

Season with the salt. Heat the butter in a pan over a high heat (you wouldn’t be able to do this with unclarified butter, it would foam too much and burn). Place the steaks in the hot sizzling butter, pepper-side down and cook for 1 minute.

Turn and cook for a further minute, searing the steaks.

Now turn down the heat and cook for a minute or two on each side, depending on whether you like steak rare or medium rare (if you like it cooked more than that, then you don’t like steak!)

Remove them from the pan and put them on a baking tray. Place in a just-warm oven while you prepare the sauce.

Pour some brandy into the pan…

Let it bubble for a minute or so…

Then add the cream: 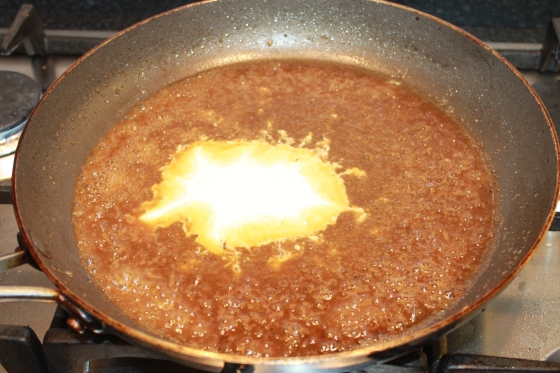 Stir it in. Season to taste. Serve by pouring the source onto a warm plate. Place the steaks on the sauce and put a couple of dots of butter on the steaks.

You could ruin this with some starch and greenery, but why bother?