One of the most searched-for recipes that leads people to Happiness Stan is ‘banana-less banoffee pie’. If you took a look at the link you can see this is not really anything to do with banoffee pie, I just like playing with words and peoples’ heads (and taste buds).

But who would look for such a thing as banana-less banoffee pie? What kind of tortured soul is even thinking about, let alone seriously considering, such a thing? Maybe they are distant relatives of the Spanish Conquistadors, who’s search for the Lost City of Gold ended as fruitlessly as their modern descendants looking for a recipe that cannot exist. Mind you the conquistadors may well have tripped over some bananas as they explored the virgin rainforests desperate for a first glimpse of Eldorado.

More likely they are conflicted. On the one hand the thought of cream, biscuit, caramel and chocolate seems like a no-brainer. However countering this is the thought of sticking bits of slimy, pale yellow fruit into an otherwise perfect creation.

This is the Eldorado of Banoffee Pies

Conflicted indeed. But only if you have an aversion to banana. Personally I see, smell and taste nothing wrong with bananas. Take ‘em or leave ‘em. Not bothered.

But you do need them if you want to make ‘real’ Banoffee Pie. In fact you need: 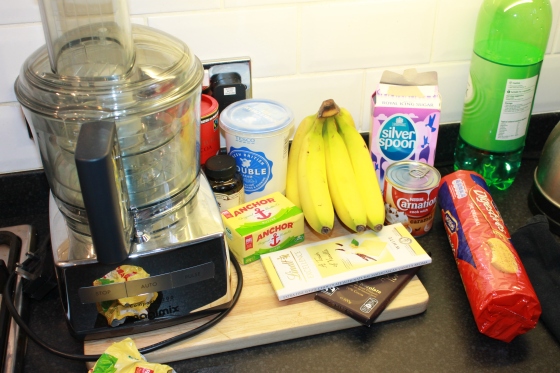 Already some might note this recipe is not a classic banoffee pie. Why? Because I have stuck a load of chocolate ganache in it which isn’t strictly speaking correct. But you’re unwitting tasters won’t care a bit.

First whizz the biscuits in a processor until powdery. This may take longer than you would think.

The oldest took control of this creation

Then add half the melted butter and continue to whizz until well combined. Don’t think too much about what you are doing; you’re adding a load of butter to biscuits that already contain loads of butter. But this isn’t optional people. If you don’t your biscuit base will have the consistency of edible sand!

Press the biscuit base into a lined springform tin (around 23cm in diameter) and pop in the fridge for half an hour to chill.

Spoon the caramel over the biscuit base. Nestle Caramel is just a shortcut to making your own caramel. You can make it from scratch (with sugar, cream and butter) or you can heat up a tin of carnation milk in a pan of water. Or you can just get it out of a tin like I do.

Return to the fridge and make the ganache. Break all of the chocolate into a glass bowl, leaving three pieces to the side for grating on to the finished pie. 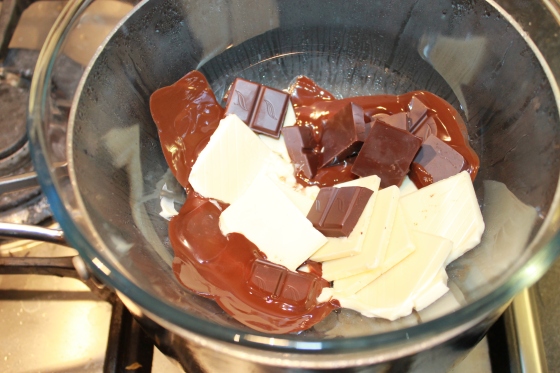 Melt over a pan of slightly simmering water until melted. Remove from the heat and stir in the remaining melted butter. 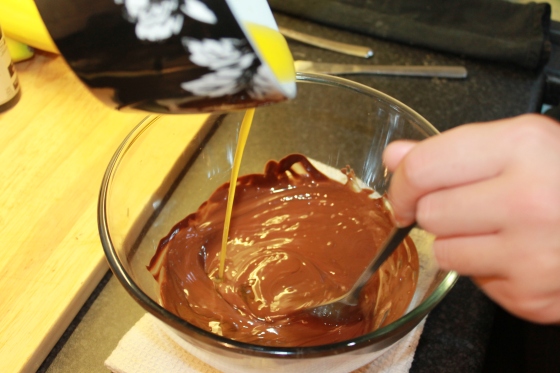 Slice the bananas the arrange over the caramel layer.

Pour the ganache over the bananas and leave in the fridge to set and chill.

Finally the cream. Pour into a large metal bowl and begin whisking with an electric whisk. Add the vanilla essence and sift in the icing sugar.

Continue to whisk until you get ‘soft peaks’. Be careful not to whisk too much or you end up with stiff cream that will be more like sweet soft cheese than the foamy slightly sloppy cream you want.

Dollop spoonfuls of cream onto the pie. Finish with cocoa powder and grated chocolate.

Now this bad boy did the rounds at both my parent’s house and the in-laws.

I was slightly disappointed with the sloppy consistency of the caramel layer. My father-in-law commented that this can be addressed by warming the caramel in a pan. I believe him as he used to work at Mars, and rumour has it that he invented the Crunchie sweet in the Celebrations selection. I do not know whether this is fact or myth but I like to think it is true!

And before anyone wittily asks how the diet is going I did not eat this badboy. Might have scooped a bit off the Mrs’ plate but that doesn’t count. 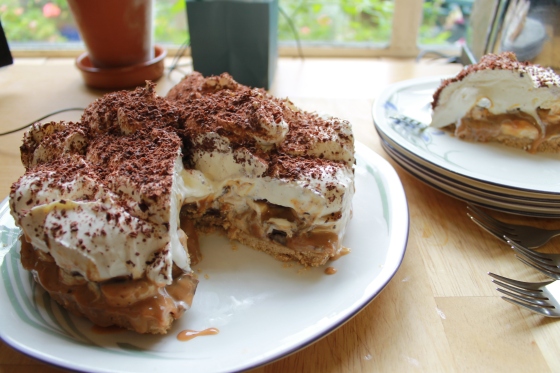