Another week, another business trip. Coming to be a habit. This time it was Amsterdam. I’ve come to form the opinion that the Netherlands and England are very similar – wet, windy, bad traffic and super-expensive cabs.

But two major differences; firstly drivers actually try to avoid cyclists (in the UK it would seem they are deliberately targeted) and secondly Holland is very flat (which is obviously why there are so many cyclists).

If people drove in Amsterdam the way they drive in London (or even worse Italy) there would be cyclist carnage.

Anyway my Easyjet plane arrived (flying is becoming increasingly similar to getting the train – it arrives, people get off, you get on and off you go). However as we all piled on people began noticing a strange rattling noise coming from the plane. Given the engines were running it was one hell of a rattle to even be able to hear it.

‘I hope that isn’t the engine.’ To which I replied

‘No way, it’s that tractor thing they are using to re-fuel the plane.’ At this point the man in front of my compatriot turned to us and stated (somewhat gleefully)

‘Oh no, that is the engine! It always does that. I get this flight every week and I asked the stewardess months ago about it. She said it’s something to do with one of the jet’s fins. Totally safe she said.’

So with that we got on the plane. Seriously. Dodgy jet fins spinning at thousands of revs at 22,000 ft? Think about that.

Anyway I wanted home, risk of death or no. I was thinking about this: Shallot Tarte Tatin.

Now this thing looked to me like it could be fraught with difficulties and peppered with potential pitfalls. And of course that just made me want to make it. 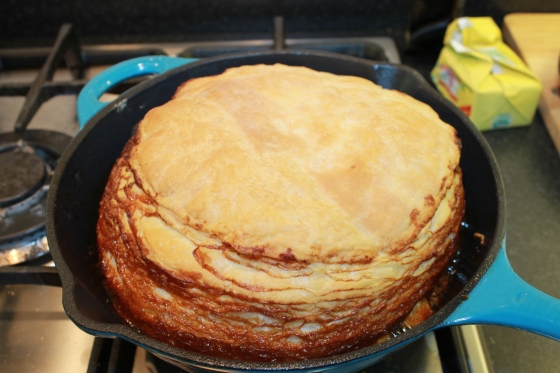 This is a tarte tatin. Seriously. It all works out though…

You will need to make some important decisions about how you eat this sweetly oniony tarty concoction. We opted for salmon (her), steak (him, naturally) with a feta cheesy salady type thing. It should really look like this: 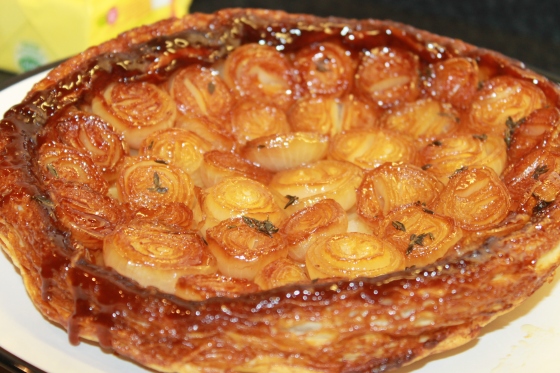 For Shallot Tarte Tatin you will need

First find a heavy frying pan that you can put in the oven (i.e. one without a rubberised handle). Warm the oven to 180 centigrade.

Put the shallots, unpeeled, into a bowl of boiling water and leave for 10 minutes. This makes it easier to peel them.

Remove the onions from the water and once cool enough to handle, peel of the skins. Try and leave the bases of the onions intact or they may disintegrate once cooked. Cut them in half across the grain.

Heat the sugar on the hob in the pan.

Add the butter, herbs and vinegar until dissolved in the sugar

Turn off the heat and place the shallots into the melted buttery sugar cut side down in concentric rings working from the outside-in.

Roll out the pastry, quite thin. (I didn’t and I had a layer of semi-cooked pastry which I personally like but some might not). Cut out a round of pastry slightly larger than the pan and lay it on top of the onions, pushing the edge down around them to form a pastry hat.

Pop in the oven for about 25 mins.

Your creation will look ridiculous at this point but do not panic. Leave for 5 mins and the pastry will start to sink down.

Get a large plate and place over the top of the pan. Careful it’s hot!.

Using some oven gloves tip the pan over and voila you have a tarte tatin!

I was only slightly amazed it came out in one piece. I was expecting half the onion to stick to the pan. But I got lucky. 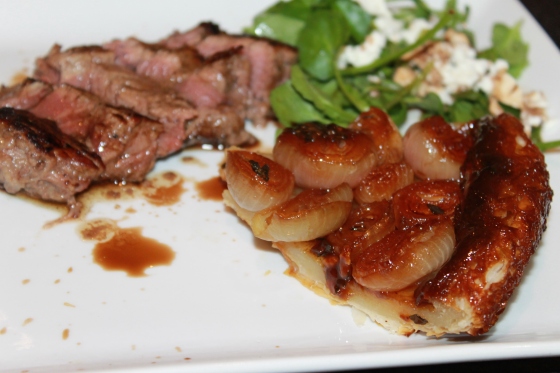 Serve with your sides of choice!