When does Salmon en Croute become a Wellington. Or vice versa. Does anyone understand what I mean. Or care?

In the fridge I found some random ingredients and with the devil-may-care attitude of someone who has just got the kids to go to bed and 1 (one) nice big glass of wine inside me I thought ‘Sod recipes, lets do this one on the fly’. So off we went:

For Salmon In Puff Pastry (as I call it) you will need:

Firstly simmer the spinach in a pan until it does that thing where it basically disappears and then strain through a sieve to remove as much water as possible:

Now finely chop the mushrooms up, the finer the better:

Get some butter melting in a pan and then add the mushrooms and cook until they too disappear (add a good dose of Lea & Perrins if you so fancy): 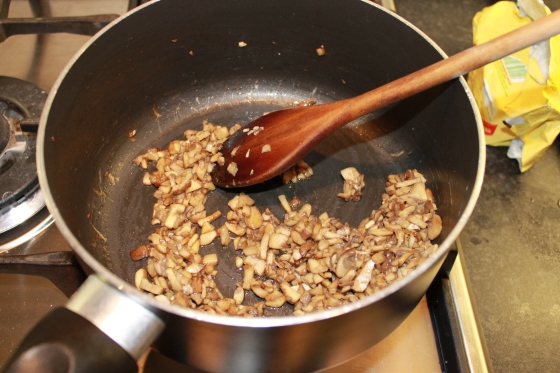 Where the hell did the mushrooms go? Meat does not do that. S’why I eat meat.

Now put the mushrooms in a bowl and cool. Add the cream cheese and parmesan and combine:

Set that aside and get the pastry out. Cut in two so that one piece is slightly bigger than the other (the bigger bit is for the bottom):

Roll out the big bit and lay on an oiled baking tray. Roll out the smaller piece so that is about half an inch smaller all round:

Now lay the salmon in the centre of the pastry and fill the gap with the spinach:

Next spread the mushroom mixture over the top:

Lay the smaller pastry sheet over the top and then lift the edge and brush some beaten egg around to help the pastry seal. Fold the pastry edge over and press with a fork to seal. Brush with egg wash and poke a hole in the middle to let the steam escape:

Bake in the oven for about 40 mins at 160 centigrade or until it looks like this: 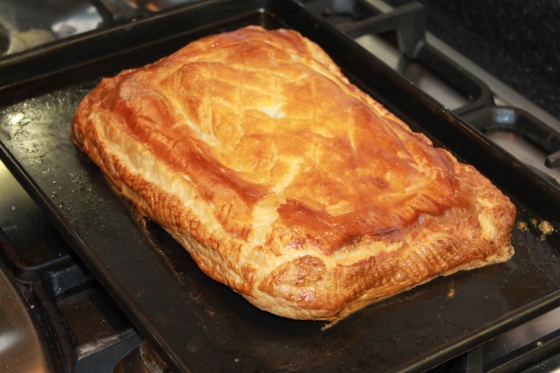 Now lets slice this bad boy open and see what’s inside. On that subject I don’t get why people go to all the trouble of blogging their delicious creations but then don’t do a money shot of the insides – I have to know what is inside that tantalising pie, cake etc… 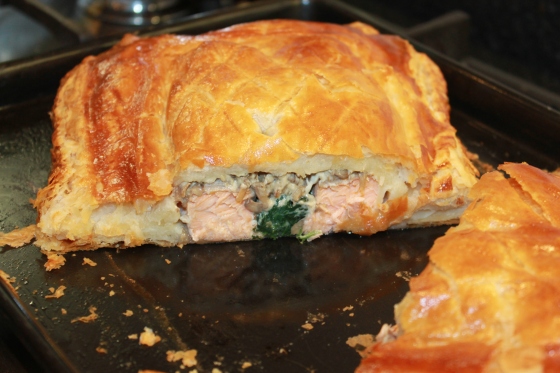 You might think that pastry could have done with a bit more cooking time. But you’d be wrong. Very wrong. That pastry is supposed to be gooey and moist on the inside (well in my world it should be anyway). This baby was served with leaves, tomatoes and a bit of mayo: 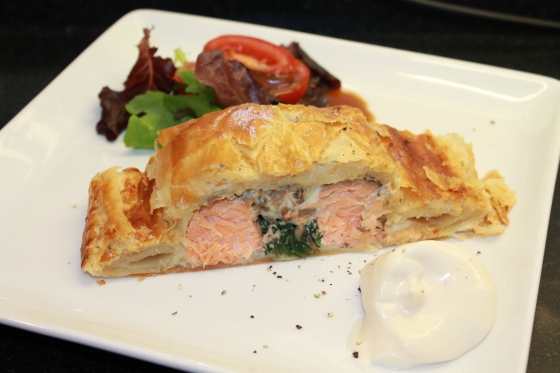 Now this was quite good. Again the diet took a bit of a battering, although I avoided the excess pastry at the sides. Honest. 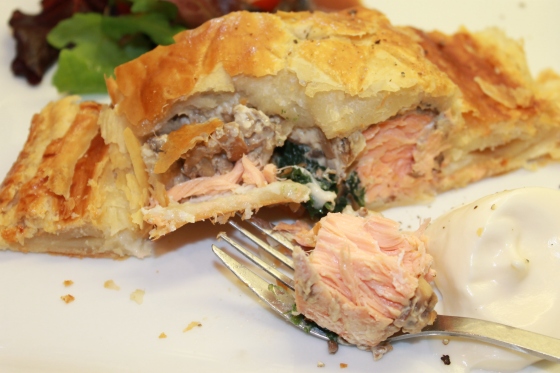