So I’m always up for eating new things (except eyeballs). I’ve also been looking for a cut of meat that will slow cook without drying out and a lot of posts on WordPress mention beef cheeks. Cheeks? Eating something’s cheeks. Just doesn’t sound quite right.

However I spotted some at Tesco of all places so I went for it. And its so cheap – this lot cost £3! 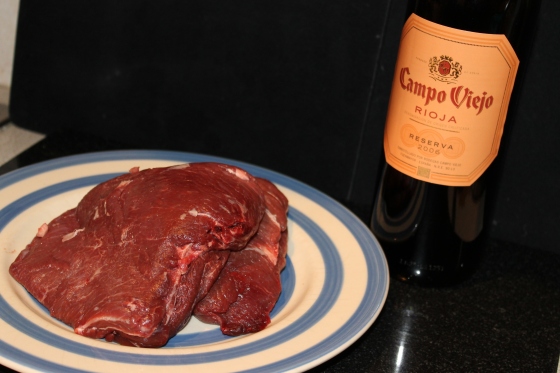 Now to prepare beef cheeks you need to a) marinate them in wine for a day and b) cook them for 4 or 5 hours at a low temperature. For someone who likes to ‘fry it and stuff it’ in 30 seconds this is quite hard. But I did it.

To make ‘Slow Cooker Beef Cheeks with Dumplings’ you will need:

On the day before cooking chop up your cheeks and place them in an airtight container. Then add half a bottle of red wine, chopped up ginger, garlic, onion and carrot.

Put the lid on and put in the fridge to marinate for 24 hours.

24 hours later take the cheeks out of the marinade (don’t throw that stuff away!) and pat dry. They will have gone a bit purple after soaking up all that booze! Now dredge in flour and fry in oil and butter for a couple of minutes, turning frequently to brown all over.

Put the cheeks in a casserole and then add the marinade, beef stock and some more onion and the mushrooms.

With half an hour to go get the pot out, strain off some juice into a cup and add some flour, stirring to form a paste. Put back into the pot to thicken the sauce. Make the dumplings by mixing self-raising flour with beef suet and some water to form a dry dough. Split into golf balls and pop onto the top of the stew. 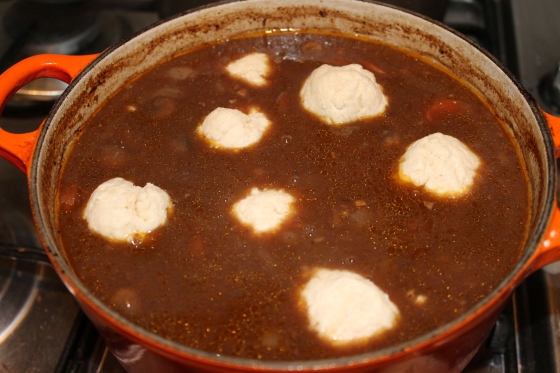 Back in the oven for another half hour until the dumplings have risen.

Now serve with sour cream and chopped chives. The cheeks were without a doubt the tenderest piece of beef I’ve ever tried. It was amazing. Better than steak by a mile!!! I think it’s the marinating time. I might actually make this again – which I rarely do…

Thats just made me think – what’s the most unusual part of an animal you’ve eaten?